Regional governor says the city of Kharkiv itself saw 5 deaths Tuesday, as Zelenskyy calls the shelling of the region ‘brutal and cynical’. 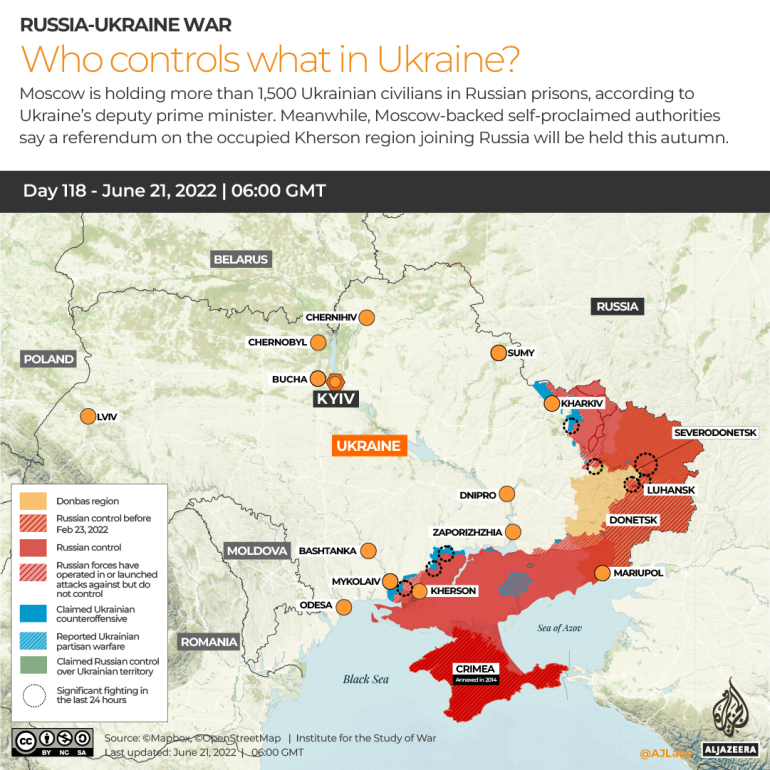 These are the latest updates:

Fire tears through gasworks in Kharkiv region after missile strike

A large fire remained uncontrolled at a gas processing factory on Tuesday in the Izium district in eastern Ukraine, after it was hit by several Russian missile strikes last week.

Kharkiv governor Oleh Synehybov confirmed on Saturday that the facility had been targeted by Russian strikes.

On the Telegram messaging app, he said that some other buildings had also been damaged.

On Tuesday, the fire was still blazing and a large plume of smoke could be seen from a distance.

Russia laid down a curtain of fire in Luhansk Tuesday, where pockets of resistance are denying Moscow full military control of the region.

“Today everything that can burn is on fire,” Serhiy Haidai, the governor of the Luhansk region, told The Associated Press.

In the city of Severodonetsk, Ukrainian defenders held on to the Azot chemical plant in the industrial outskirts. He said Russian forces were turning the area “into ruins.”

“It is a sheer catastrophe,” Haidai told the AP in written comments about the plant. “Our positions are being fired at from howitzers, multiple rocket launchers, large-caliber artillery, missile strikes.”

Haidai said on television that 568 civilians were sheltering at the plant, including 38 children. Moscow controls around 95 percent of the Luhansk region.

The Luhansk region, where fighting is raging in the key city of Severodonetsk and surrounding areas, is “the toughest area right now”, Ukraine’s President Volodymyr Zelenskyy has said.

“With the help of tactical moves, the Ukrainian army is strengthening its defence in the Luhansk region, which is really the toughest area right now,” Zelenskyy said in his nighttime address, adding Russians were also putting “serious pressure” on Donetsk.

“In the Kharkiv region there is brutal and cynical Russian artillery shelling. It will not give anything to the occupiers, but the Russian army is deaf to any rationality. It simply destroys, simply kills – in this way it shows its command that it is not standing still,” Zelenskyy added.

At least 15 civilians were killed in the Kharkiv region by Russian shelling on Tuesday, the regional governor has said.

Five people were killed in the city of Kharkiv itself and 11 wounded, Oleh Synegubov said on Telegram, adding that among the dead was an eight-year-old girl.

Another six people died in Chuhuiv some 40km southeast of Kharkiv and three had died in Zolochiv, 40km to the northwest of the city, he said.