Kabul, Afghanistan – The news of the killing of al-Qaeda chief Ayman al-Zawahiri slowly made its way through the Afghan capital. For many Afghans, it came as a complete surprise.

The announcement by the United States of a “precision” drone attack that killed the elusive 71-year-old al-Qaeda leader came in Kabul in the early hours of Tuesday.

As the day advanced, more details started to trickle in.

However, in a sign of the growing fears over the freedom of speech under a Taliban government, many city residents seemed hesitant to talk about the killing of al-Zawahiri, who had a reward of $25m on his head for the 9/11 attacks.

Mohammad Jamal operates a street cart not far from the house in Kabul’s Sherpur area where Zawahiri and his family were reportedly staying. He says he had little idea about the al-Qaeda chief or his alleged killing.

“How would I know who he is? I don’t even know what he looks like,” said the merchant who hails from the eastern Afghan province of Laghman.

Jamal, like other residents and streetside workers Al Jazeera spoke to, said his primary focus is the country’s economy, which has been struggling under the weight of Western sanctions and aid cutbacks since the Taliban returned to power a year ago.

“When would I watch TV to know who he was? I couldn’t even tell you who the head of the [Islamic] Emirate is right now,” Jamal said, referring to the name the Taliban uses for its government.

Even those who do have a better sense of who al-Zawahiri was are afraid to talk, said Jamal.

“This isn’t the republic where people can protest after every suicide bombing and attack. No one wants to talk about these things under these conditions,” he said.

International organisations such as the United Nations and the Committee to Protect Journalists, and rights groups Human Rights Watch and Amnesty International have all accused the Taliban government of stifling free speech since they assumed power.

Journalists in Kabul told Al Jazeera the roads leading to the house where al-Zawahiri was killed were blocked and that they were told to turn around when trying to get closer to the purported residence. 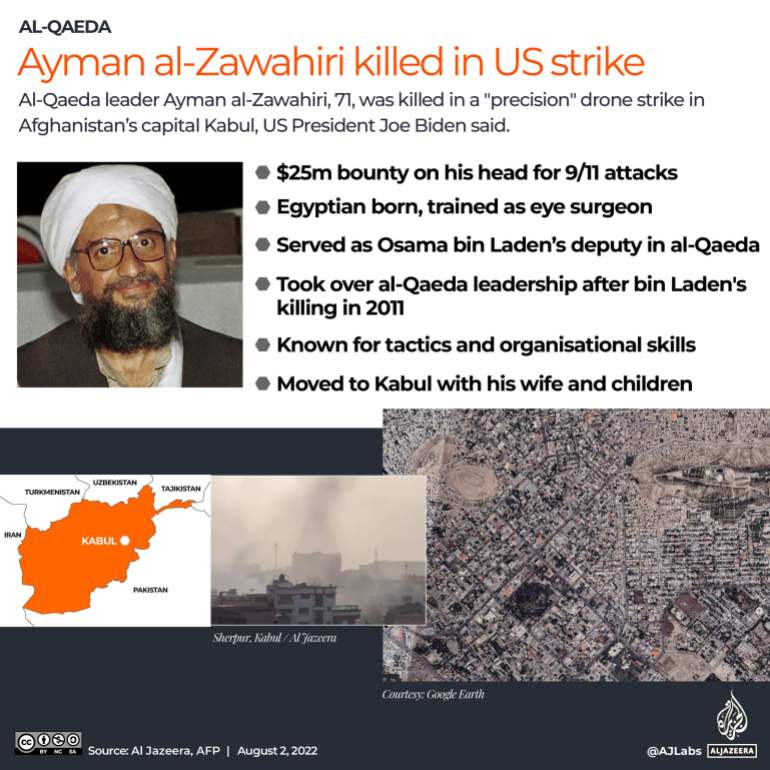 A traffic police officer in one of Kabul’s commercial centres said he, too, saw journalists trying to get information about the US strike, but to no avail.

The officer did not want to give his name due to security concerns, but said that he saw media crews trying to speak to the passersby.

“They tried to film people and ask them what they thought but no one spoke to them. I don’t think anyone will talk about it now,” said the officer.

Online, though, Afghans outside the country were more willing to speak freely about the second al-Qaeda leader the Taliban reportedly hosted in Afghanistan in 30 years.

Shafi Karimi, an Afghan journalist currently living in France, was struck by the location of al-Zawahiri’s alleged killing.

“His last months were spent in an upscale Kabul neighborhood where top officials from the Taliban also live,” Karimi tweeted.

Sherpur, the neighbourhood where al-Zawahiri’s house was located, has long had a controversial reputation among Kabul residents.

During the years of Western-backed government, it was known as the area where strongmen, ministers, governors and legislators of the former government lived.

Most of those officials fled when the Taliban stormed into Kabul last year, with the group’s officials and members reportedly taking up residence in many of the same homes and compounds, including the one al-Zawahiri was said to be killed in.

Emran Feroz, an Afghan-Austrian journalist who has tracked drone strikes in Afghanistan and other countries for nearly a decade, fears the drone that killed al-Zawahiri may not be a one-off.

“During the last months, there were multiple reports about US drones above Kabul. Seems that all these accounts turned out to be true,” Feroz tweeted.