Since the 1990s the Russian Air Force has relied overwhelmingly on heavyweight fighter and interceptor aircraft for all major roles, with all lightweight classes such as the MiG-21BiS and MiG-23MLD retired shortly after the disintegration of the Soviet Union. Only the MiG-29 fourth generation medium weight fighter was left in service outside the heavy weight range, but even these have been neglected for investment in modernisation and have seen their numbers contract very sharply. The backbone of the Russian fleet equipped for air to air combat is instead comprised of MiG-31 Foxhound heavyweight interceptors and derivatives of the Su-27 heavyweight fighter.

The MiG-31 entered service in the Soviet Air Force from 1981 and was a pioneer of many advanced technologies – with its use of a phased array radar being a unique feature for over 20 years until the introduction of the French Rafale, Japanese F-2 and American F-22 from 2001 and 2005. The Foxhound is widely considered the most capable aircraft fielded by any air force in the Cold War era in terms of air to air capabilities, and is the heaviest and fastest operational fighter or interceptor in the world today. Although ending production in 1994, the aircraft have been modernised extensively since 2010 bringing the fleet of over 100 up to the MiG-31BM/BSM standard, which revolutionised their armaments, avionics and particularly their radars which have few rivals among other fighter/interceptor classes largely due to their sheer size. Over 20 have also been brought into service as the MiG-31K and MiG-31I strike variants, beginning in 2017, with an unknown number also allocated to anti satellite warfare roles with an unknown designation. The Su-27 entered service from 1985, and unlike the more costly MiG-31 it was marketed extensively for export after the fall of the Soviet Union leading to considerable investments in modernisation of the design. The most advanced derivatives of the Flanker developed for the Russian Air Force include the Su-30M2, Su-30SM/SM2, Su-34 and Su-35S, the last of which is by far the most costly and the most specialised in air superiority missions. Based on the Soviet Su-27M program, the Su-35 was the first ‘4++ generation’ fighter in the world and became operational in the Russian Air Force from 2014. The aircraft was designed to counter fifth generation fighters of the U.S. Air Force such as the F-22 and F-35, and when entering service was widely considered the most capable operational production fighter in the world. The Su-35’s most notably advantages over the original Su-27 include a new much more powerful sensor suite centred around the Irbis-E radar, a significantly more powerful AL-41 engine, an airframe making greater use of lighter and more durable composite materials, an extended range and new electronic warfare systems and avionics. The aircraft also makes use of triple radars, with two X-band AESA radars embedded in its wing roots providing unique capabilities for electronic warfare and the tracking of stealth aircraft. Its operational costs and maintenance needs are notably lower than those of the Su-27. 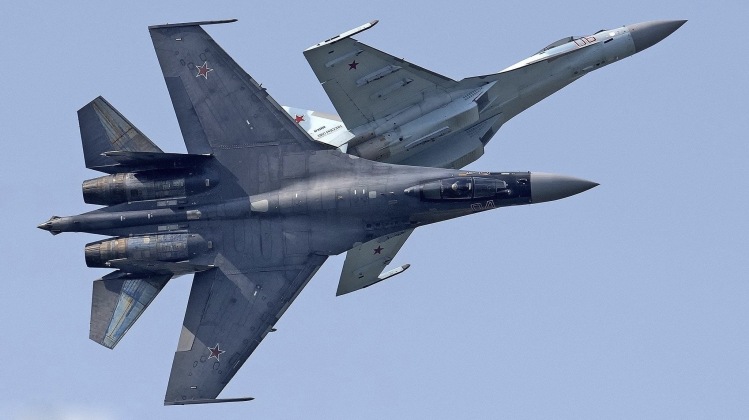 Until the entry into service of the Su-57 next generation fighter from December 2020, of which only six now serve in the Russian Air Force, the Su-35 and MiG-31BM/BSM were the leading contenders for the title of Russia’s most capable fighter/interceptor in air to air combat. A major advantage that the Flanker series has had is its continued production, meaning the airframe and engines have be improved significantly since the Cold War where enhancements to the Foxhound have been relegated to integrating new avionics and weapons onto old airframes. A plan for an enhanced MiG-31 variant, providing roughly analogous improvements to the design as the Su-35 provided over the Su-27, was the MiG-31M. The aircraft’s engines would have remained today the most powerful ever integrated onto a fighter/interceptor, but while its superior endurance and flight performance were lost when the program was cancelled in 1994 its improvements in avionics and weaponry were integrated onto the MiG-31BM/BSM from 2010.

Comparing the MiG-31 to the Su-35 their roles in air to air combat differ significantly, with the Foxhound designed as a dedicated interceptor rather than a fighter and thus being significantly faster, capable of using its weapons at much higher altitudes, and maintaining unrivalled long range missile capabilities. The Su-35 meanwhile has a a far faster climb rate, a superb thrust-weight ratio and a g force endurance that provides an overwhelming advantage at close ranges. Maintenance requirements and operational costs are also significantly lower. 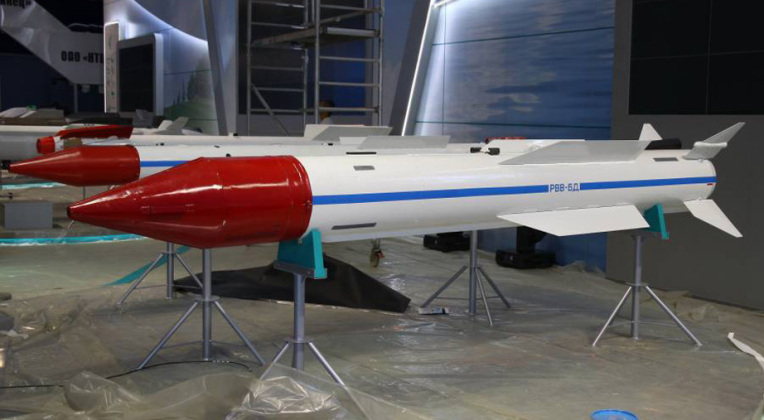 The MiG-31 is arguably better suited to combat at long ranges, and as its primary armament uses the R-37M air to air missiles which are among the most capable in the world. The missiles have a 400km range, carry massive 60kg warheads and travel at unrivalled Mach 6 speeds, making them difficult to evade and complimenting the size and power of the MiG’s sensor suite. These long range capabilities make the MiG-31 an excellent complement to Russian ground based air defences in protecting the country’s vast airspace. The MiG-31 is also well suited to intercepting cruise missiles due to the uniquely high situational awareness provided by its oversized Zaslon-M radar, which is a capability few aircraft have. The Su-35’s Irbis-E radar was developed later than the Foxhound’s Zaslon-M, but due to its much smaller size it is not as powerful. Its hybrid mechanical and electronic scanning, however, allow it to detect targets across a much wider arc, while its use of L-band AESA radars in its wings provides an edge for electronic warfare and for detection of stealth targets.

The Su-35 primarily uses R-27ER and R-77-1 missiles which have ranges of 130km and 110km respectively, although more recently its range disadvantage has been partly closed with the integration of the R-37M. These have yet to be widely integrated onto the Su-35 fleet, however, while the represent the MiG-31’s primary armament, with the smaller Flanker seeing its flight performance compromised significantly if carrying even four. The MiG-31 by contrast can carry six, alongside six R-77s and additional defensive short ranged missiles, with its carrying capacity being very significantly higher. The Su-35s reportedly cannot fire R-37s at high altitudes comparable to the MiG-31, which means they have less kinetic energy. 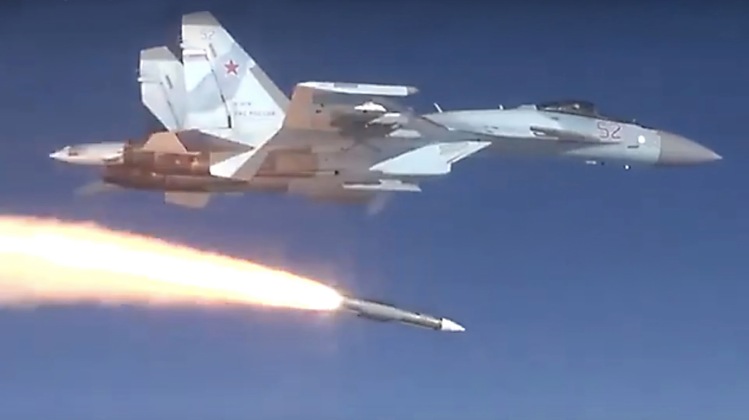 A significant advantage the MiG-31 continues to hold over the Su-35 and other Flanker variants is that its capabilities have not been as extensively studied by Russia’s Western adversaries. While the Su-27 was initially unavailable for export, the fall of the USSR led to sales of the fighter and its more modern variants across the world including to U.S. aligned states and to the United States Military itself, which acquired two of the aircraft from Belarus and studied them extensively. Exercises with Indian and Malaysian Su-30s, and operations in close proximity to the Su-30 and Su-35 in Syria, provided further intelligence. The capabilities of the MiG-31 by contrast are not well known with the jet never having been exported, and while U.S. intelligence did obtain some specifications of early variants through espionage the USSR quickly responded by modifying its to fleet to the MiG-31B standard, with more extensive subsequent modifications leaving the Foxhound’s capabilities even less well known.. 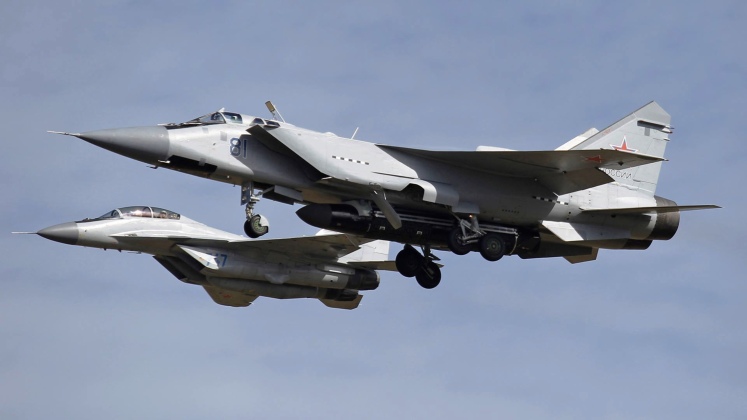 Ultimately the MiG-31 is a more versatile aircraft, particularly as variants have been equipped with ballistic missiles and anti satellite weapons providing capabilities the Su-35 cannot compete with. In air to air combat the two designs are more closely matched with the Su-35 able to pose a threat at all ranges while the Foxhound poses an arguably much greater threat at long ranges with large superiority in firepower, engagement range and situational awareness. The MiG-31 is thus best suited to vast theatres such as the Arctic or the Pacific. The aircraft’s emphasis on long range combat and resulting low manoeuvrability, combined with its very high strength titanium airframe, have also limited the wear which operations place on the aircraft allowing them to remain in service without issues of metal fatigue or significant increases to maintenance needs over time – contrasting to the Flanker for which the ability to perform strenuous and extreme manoeuvres is key to its performance. The limited capabilities of its air to air missiles are a primary shortcoming of the Su-35, although the fighter may improve in the area as it integrates R-77M missiles that entered service in Su-57 units around 2020. Until then, however, the primary advantage of the Su-35 may well be its much lower operational costs and maintenance needs compared to the older and much heavier Foxhound, which makes it an attractive aircraft for the Russian Air Force as well as for export.

The Case for Traveling Alone