Moscow says its troops have seized Klishchiivka as they press their offensive in the eastern region of Donetsk.

Russia says it has taken control of an eastern Ukrainian village near Bakhmut, a city where fighting has been raging for months.

The Russian Ministry of Defence said in a war update on Friday that its forces had seized Klishchiivka, a village in Ukraine’s Donetsk region.

Klishchiivka, which had a pre-war population of about 400 people, was captured by ground forces aided by artillery and air support, the ministry said.

The village sits about 9km (6 miles) south of Bakhmut, a strategically important city that Russian units, supported by mercenaries from the Wagner Group, have fought Ukrainian soldiers in some of the war’s bloodiest battles.

Both the Wagner Group and Russia-backed separatist forces in Donetsk, fighting under the banner of the self-proclaimed breakaway Donetsk People’s Republic, had claimed to have seized control of Klishchiivka before the defence ministry’s statement. 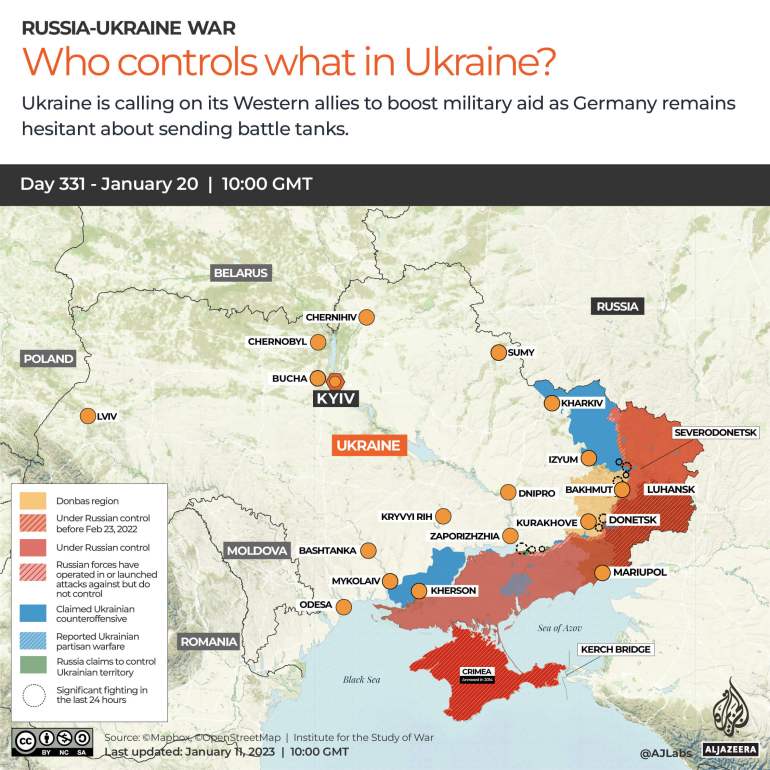 The ministry said its forces had also taken control of the village of Lobkove in southern Ukraine’s Zaporizhia region.

Zaporizhia and Donetsk are two of four regions in Ukraine’s east and south partly occupied by Russia that President Vladimir Putin moved to unilaterally annex in September.

Russia made its claims of battlefield advances as Ukraine’s Western allies met in Germany to discuss boosting their military support.

The talks at the Ramstein Air Base follow Ukrainian warnings that Russia is seeking to re-energise its invasion following a string of setbacks in recent months.

The United States and Finland announced new military aid ahead of the meeting, where the main focus was on whether Germany would allow armies across Europe to send German-made Leopard 2 tanks to Ukraine.

“We have to speed up,” Zelenskyy said. “Time must become our weapon. The Kremlin must lose.”

The European Union’s top diplomat, Josep Borrell, told reporters in Madrid that some European countries were ready to send heavy tanks and that he hoped a decision to do so would be taken.

Berlin has veto power over any decision to export its tanks from countries that use them, and Chancellor Olaf Scholz’s government appears to be reluctant, fearing such a move would provoke Russia.

Al Jazeera’s Step Vaessen, reporting from the meeting, said whether Germany sends its Leopard 2 tanks is a “million-dollar question”.

“The one key thing that Ukraine really wants and it says it needs, the Leopard 2 tanks, has not been mentioned so far as a contribution by Germany,” Vaessen said.

Germany’s new defence chief, Boris Pistorius, told reporters no decision had yet been made on the tanks.

How antioxidants produced by mitochondria reach the cell surface to protect...
Scroll to top